The Brine Garden —
Natural By Design 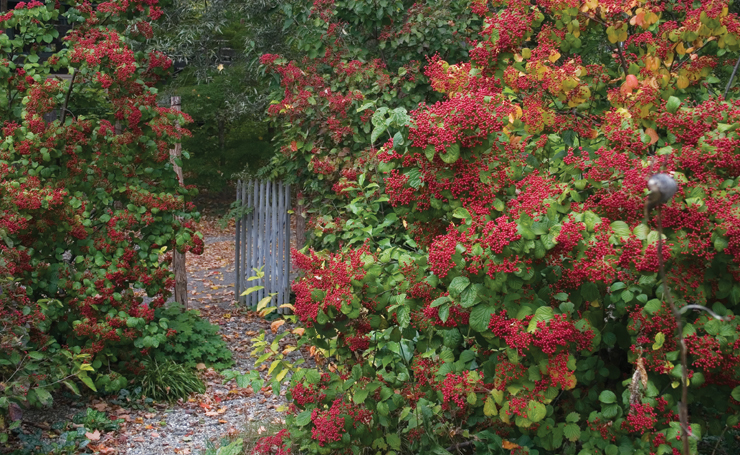 Duncan Brine doesn’t play by the rules. In the coloring book of his own garden, Duncan scribbles outside all of the lines. There’s no linear anything. He mixes up his foregrounds and backgrounds. Paths thread the garden but there is no “way to go;” instead, one dives into what he calls its purposeful confusion to embark on a journey of discovery. While many garden designers strive for a signature look, Duncan works hard to make the designer’s hand invisible, and says if someone ever asked him where the garden ends and woods begin, he would consider it a compliment. He has worked hard to, as he says, “Design something to look like it wasn’t designed.” 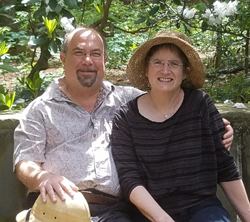 Consider, for example, the most gardenesque section of the sprawling six-acre horticultural free-for-all known as the Brine Garden; The Maze. This exploration-worthy outpost lies across the street from the main garden and the two houses that serve as the Pawling, NY home and headquarters for GardenLarge, the design firm helmed by Duncan and his wife Julia.

You’re wandering its network of gravel pathways in primetime, which in these gardens is fall, when the multitudinous viburnums (Viburnum spp. and cultivars) bear exuberant bursts of bright red berries, or the purple fruits of beautyberry (Callicarpa dichotoma ‘Early Amethyst’) glimmer like amethysts. Stands of red and yellow twig dogwood (Cornus spp. and cultivars) offer their own colorful commentary. Every few steps reveals a new view, or an old view made new by a change in perspective. 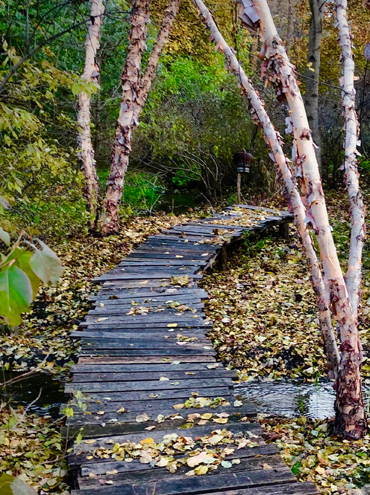 Overhead, the feathery seedheads of giant Chinese silver grass (Miscanthus giganteus) fly like flags, framing and edging parts of the property, and serving as a botanic way station on a sightline extending toward a distant ridge.

That far-off escarpment serves as the quintessential expression of the notion of the borrowed view. It’s Duncan’s riff on the Chinese and Japanese technique of incorporating a distant landscape into a nearby garden design by echoing its shape in the foreground or creating sightlines that emphasize the far-off scene, matching its foreground shapes to the distant. “That distant view is definitely part of the garden,” Duncan says. “In the early days I was really worshipping that ridge.’

Down an adjoining path, you will happen upon the flaming torch of a gold dawn redwood (Metasequoia glyptostroboides ‘Ogon’), a beacon announcing your proximity to the bald cypress (Taxodium distichum) allee, a tour de force almost upstaged by its focal point: the sculptural circus of a weeping Katsura (Cercidiphyllum magnificum ‘Pendulum).

Along the way, your sensory journey is perfumed, in late summer, by the fragrance of summersweet (Clethra alnifolia cultivars) a plant which manifests many elements of Duncan’s idea of an excellent candidate for any woodland garden. It is at once low maintenance, simple, native, pleasing to the eye, and it bears fragrant flowers at an unusual time of year. What’s not to like?

Open Day at The Brine Garden
The Brine Garden, 21 Bluebird lnn Road, Pawling, NY will be open Saturday, Oct. 12 from 12 to 6 pm as part of The Garden Conservancy’s Open Days program. Admission is $10 per person; children 12 and under are free. For more info, visit gardenconservancy.org and gardenlarge.com

As eye-popping and sensory as strolling the maze can be, the Brine Garden’s real treasure trove lies across the street, where a fantasy forest spills across a rolling hillside and frames a serpentine stream whose banks are, in some places, nubbled with the emerging knees of bald cypress, and in others crossed by rustic wooden footbridges.  There, you will find areas such as Mulberry Cliff, Brothers Island, Cactus Hill, Microburst, and Hidden Corner.

In these places and others on the property, the rhythms and rhymes of nature rule. Trees are planted in mini communities, which blur with and overlap other nearby communities. The idea of planting clusters of single species, which then bump against and overlap with another single species cluster is, says Duncan, “a structural element that is not easy to recognize.”

Duncan Brine presides over a garden ruled by trees. And in the 29 years he has spent developing his six-acre garden, he has developed some specific thoughts about woody plants, some of which he is happy to share.

“l spend a lot of time pruning the canopy to control light.”

“Prune surgically to open a tree so you can appreciate it as sculpture. ”

“If you can get people interested in native plants at all, you’re winning.”

“I’m really just crazy about Persian ironwood (Parrotia persica)- they are the most sculptural tree going. I prune them hard to expose their core.”

“Red buckeye (Aesculus pavia) is the showiest of small native trees. It has outrageously huge red flowers, but the tree stays small.”

“I love being inside a plant.”

“Katsura is not native but we love it anyway – its stature, its overall shape, it’s a strong grower, and the bark and leaves are good. Weeping Katsura  (Cercidiphyllum magnificum ‘Pendulum’) is the queen of the whole property. We liked it so much we planted a few more.”

Accordingly, the bald cypress grow thickly at the core of their community, then thin before merging with the outer edges of an airy grove of multi-trunked river birch (Betula nigra ‘Heritage’), which rises astride the sinuous stream.They in turn give way to the next community and the next. There are groupings of eastern larch (Larix laricina), swamp white oak (Quercus bicolor) and katsura. 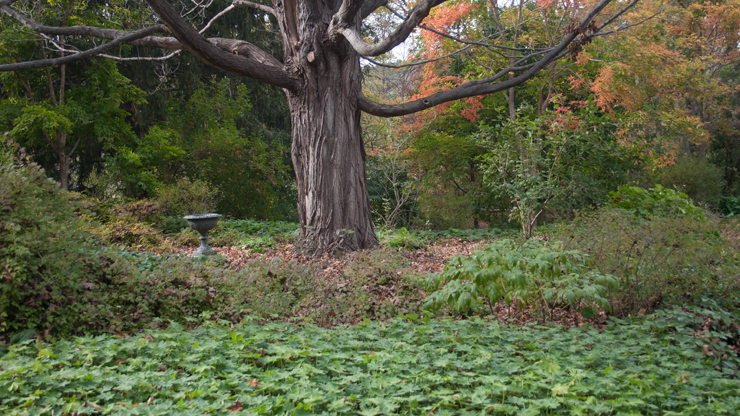 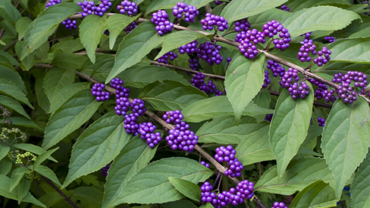 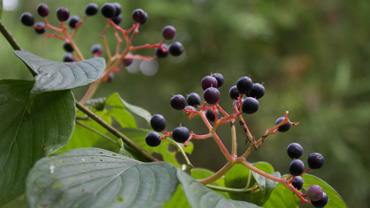 But it’s never too obvious. In one spot, a tiny larch rises at the foot of a birch as if springing from a seed dropped by a bird rather than an idea drawn from the designer’s sketchbook. Always there are interlopers, rogue elements providing a sense of studied randomness that manages to appear entirely natural.

Throughout, woody plants rule.  “Trees are the most satisfying, the most worthwhile, the easiest to care for plants,’ he says. “Its just no question.” When the Brines first moved to their Pawling, NY property in 1990, it was essentially an old cow pasture. Duncan saw it differently. “I wanted it to be like nature.”

Along with the naturalist style goes native plants. The garden is full of them, but Duncan is no slave to regionalism. “You do want to have a basic structure of natives,” he says, “and occasional specimens of non-natives. There are lots of plants to love that aren’t native, but I stray conservatively.” Thus the Brine Garden’s native matrix is enriched with a splendiferous assortment of Katsuras, Parrotias, Metasequoias, and more.

All of which is a long way from Duncan’s first real garden, planted in a patch of earth next to an auto body shop in Brooklyn. But it’s not quite as far as you might think from his high school aspirations to be a director of theatrical plays. The Brine Garden is, if nothing else, a dramatic work of his own. It is a stage set glorifying the wonders of the plant world. 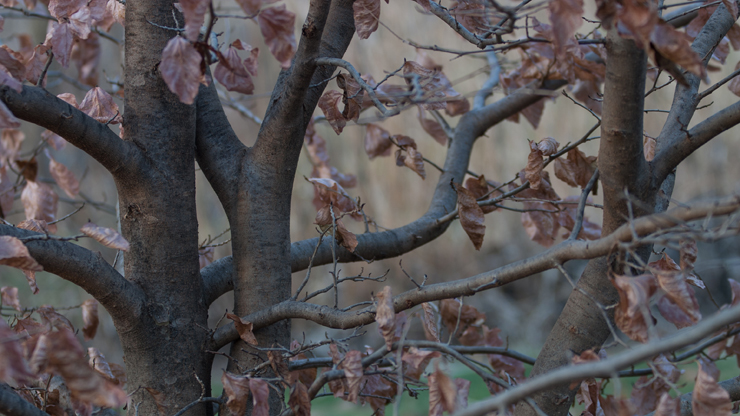 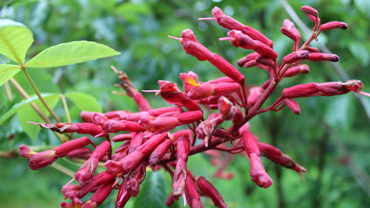 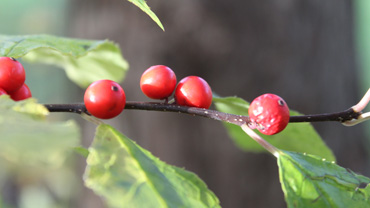 It was a kind of a circular journey.  Duncan’s passion for theater led him to Hollywood and eventually a stint as art director for Faerie Tale Theatre. There he made a garden as a film set, and had so much fun that he started thinking more and more about plants and gardens and design. Plants, he realized, exuded a dramatic presence of their own. They were like living sculptures, and their expressive qualities enthralled Duncan. He soon came to the conclusion that designing gardens offered many of the same rewards of directing theater: the excitement and fulfillment of doing creative things you then share with other people.

He and Julia embarked on a world tour to learn more. They hit all the horticultural hotspots: Thailand, Singapore, Italy, France, England. Some of Europe’s great gardens were a disappointment.  “They were all about the architecture, not the plants,” he says.

“We traveled the world looking at gardens to be sure we could be different.” Then, he says, “We set out, point by point, to do the same things differently.”

He has succeeded in his quest. Not only has he created the six-acre Brine Garden, he has developed clients in New York, Connecticut, and beyond. Many of the trees, shrubs and perennials destined for client gardens are divisions or seedlings of plants drawn from his own garden’s population of more than 400 different species, roughly half of which are native plants. Duncan also teaches a landscape design seminar at the New York Botanical Garden and his poetic, pithy presence on Twitter led Timber Press to dub him the Ogden Nash of the garden world.

There is a difference even in his approach to dealing with the deer that prey on so many gardens in our area.  A small herd of five or so visit his yard daily. To deter their predation Duncan takes an approach in keeping with the GardenLarge notion: “I planted 50 viburnum, and simply out planted the deer.” In addition, much of what goes in the garden is lower in hierarchy for preferred deer dining, so you won’t find lots of hostas or other deer candy in the Brine Garden. That’s not to say there aren’t a few perennials among the woody plant brethren: you’ll find everything from Brobdingnagian plume poppies (Macleaya cordata) to tiny golden thymes (Thymus praecox ‘Evergold’ )

Plants that look their best in fall abound because in addition to the Brine Garden’s robustly naturalistic style, it is distinctive for its focus on the seasonal beauty of autumn. “We emphasized fall because we knew most other gardens emphasize spring or early summer.  I set out to be different.”  Accordingly, in addition to countless woody plants bearing foliage or fruit set ablaze by fall’s fiery finale, the are plenty of herbaceous autumn splendors such as a toadlily (Tricyrtus spp. and cultivars), false aster (Boltonia asteroides), Arkansas blue star (Amsonia hubrichtii), and more. Lots more.

Because in the Brine Garden’s ongoing evolution, there is always more. 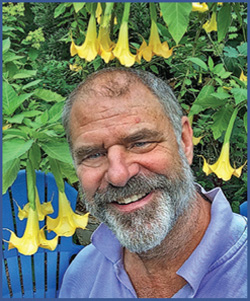 Steve Silk designs, photographs, lectures and writes about gardening. He is a past president of the Connecticut Horticultural Society, a former newspaper photographer, travel writer, and was managing editor of Fine Gardening.