Inviting Nature into Your Garden 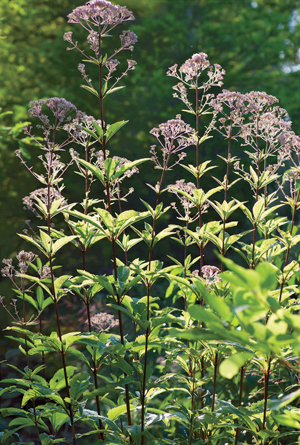 If you’re starting a new garden or contemplating a redesign, consider a naturalistic approach, which has renewed relevance in today’s environment.

TWENTY YEARS AGO, I left New York City with my future wife to make a garden and a new life in the country, north of the city. There I found inspiration in moving away from the status quo of traditional gardens and toward a career creating naturalistic gardens.

The term “naturalistic” is often used loosely; it can mean different things to different people. A naturalistic garden combines a gardener’s needs and desires with nature’s dictates; its design cannot be premeditated because its inherent beauty is inextricably linked to the landscape on which it is created.

Naturalistic gardens should look different in different parts of the country. They are not generic or paint by numbers—each one is unique. The diverse native flora, land forms, soil, climate, and other regional characteristics inform their individuality. The goal of a naturalistic garden is to idealize and partner with nature’s potential in a given place. 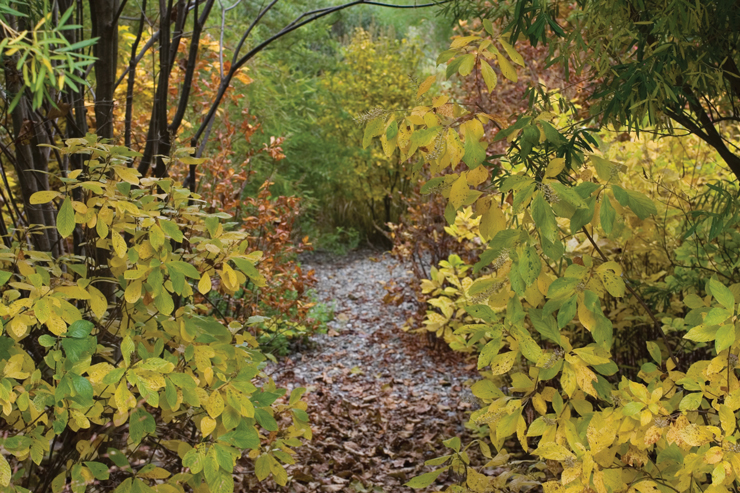 In autumn, the foliage of summersweet (Clethra alnifolia) creates a colorful corridor through the Brine garden. According to Brine, this is “somewhat of a secret path, designed to draw visitors through the garden.” The plantings reflect one of Brine’s design tips, which is to repeat signature plants along both sides of a path. In addition to the species summersweet in the foreground, Brine has planted the cultivar ‘September Beauty’ further down the path. He likes this selection because of its vertical habit, later bloom time, and darker green summer foliage. © 2011 Duncan Brine 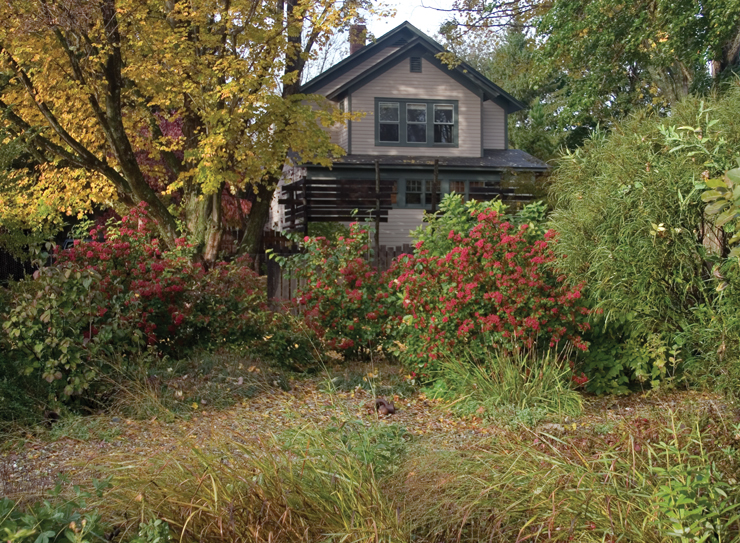 Duncan and Julia Brine’s home, above, is one of two buildings on the property dating to 1920. The other building serves as the office for their design firm. Planted in front are several different viburnums, including Wright viburnum (V. wrightii) and linden viburnum (V. dilatatum), that bear attractive berries in fall and winter. Natives such as black flowering sedge (Carex nigra) and switch grass (Panicum virgatum) add texture in front of the shrubs. ©2011 Duncan Brine

Naturalistic garden designs can be adapted to spaces of all sizes. A small garden is a fragment, which borrows or quotes from nature, while a large country garden may provide enough space to include areas that replicate different regional ecosystems. A small garden can be used to showcase vignettes representing aspects of a meadow, while a large garden might include an actual meadow.

People habituated to the regimented appearance of a traditional garden can initially be taken aback by a naturalistic garden’s seemingly structureless, scruffy look. Naturalistic gardens are sometimes a taste that takes some time to acquire, but they are worth the effort for many reasons. 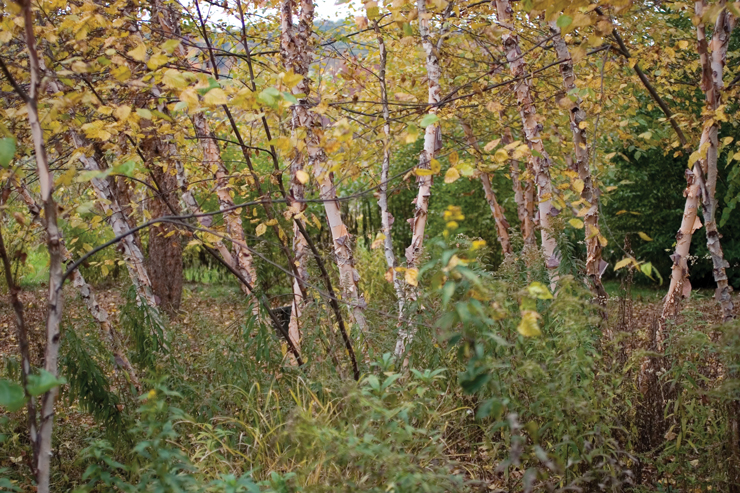 This grove of ‘Heritage’ river birches (Betula nigra) is one of several groupings of native trees Brine planted in an area of his garden that was formerly a meadow. The goal is, over time, to convert the meadow into a woodland. “To create a more natural look, we’ve planted the trees gradually over a number of years, mimicking a multi-generational community,” says Brine. “This gives the grove a more natural look because the trees are not all the same height.” ©2011 Duncan Brine

One of the inherent goals of a naturalistic garden is to conserve resources and reduce our environmental footprint. Acute problems vary from region to region, but ecosystems fragmented by development and urban sprawl prevail now throughout our country. Properly conceived, naturalistic gardens can reduce water usage, enhance water quality, compensate for habitat loss, and encourage biodiversity.

A naturalistic garden is a personal initiative and pleasure, but in today’s world it is also an expression of a widening awareness that nature is vital and precious; it needs our help.

Observing often simple design techniques provides a structural underpinning and guides creation of a naturalistic garden. In this article, images from my rural New York garden illustrate some of the techniques I use in my designs, but the concepts discussed are broadly adaptable in most regions of the country.

Perhaps surprisingly, one of the most important influences on my personal design philosophy is an entomologist and ecologist named Doug Tallamy. In my opinion, not since Rachel Carson and her groundbreaking book Silent Spring (1962)—which warned about the dangers of the pesticide DDT—has there been such a persuasive observer of and advocate for the environment as Tallamy.

A professor in the entomology and wildlife ecology department at the University of Delaware, Tallamy is one of several national proponents of a growing movement that advocates naturalistic gardens. As a university professor, he is accustomed to teaching, but with the publication of his book Bringing Nature Home: How Native Plants Sustain Wildlife in Our Gardens (see “Resources,” page 41) and his popularity as a speaker, his classroom has enlarged to a nationwide audience. 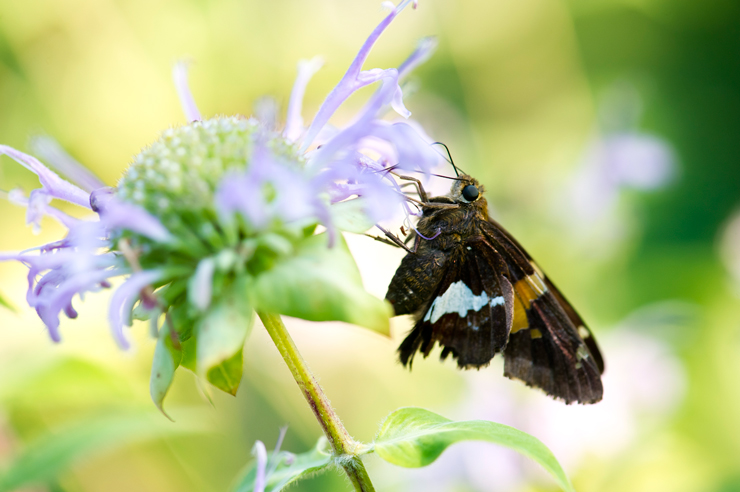 When it comes to good native plants for wildlife, two that Brine recommends are summersweet, top, and wild bergamot (Monarda fistulosa), above, which attract a wide variety of insects, including bees, butterflies, and moths. Brine values summersweet because of its fragrant flowers, wildlife value, and late-summer bloom, “when nothing much else is in flower.” Wild bergamot was well established on the property when the Brines acquired it, growing in a meadow alongside companions such as goldenrods (Solidago spp.) ©2011 Rob Cardillo

In his presentations, Tallamy uses a combination of statistics about habitat loss and decline in wildlife—particularly pollinators—with engaging images of native plants and animals to encourage homeowners to reorient their priorities, habits, and perceptions of home landscapes. Specifically he advocates the use of more native plants, particularly woody species that create structure in gardens and provide shelter and food for wildlife. He also urges people to devote more space to plants and less to that ubiquitous suburban monoculture, the lawn.

Tallamy’s goal is to conserve and increase biodiversity, so from his perspective it doesn’t really matter whether or not people take a personal interest in the trans-formative processes that happen in their gardens. As Tallamy writes, “homeowners can observe and enjoy the restoration of complex food webs in their yards, or they can ignore the process.” 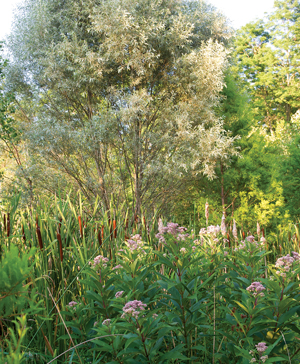 Another of Brine’s design maxims for naturalistic gardens is, “When you have a large area to work with, keep it simple, otherwise you may lose the majesty of the space.” Here Brine has planted Joe Pye weed, foreground, at the point where visitors stand on a wooden bridge that crosses a stream. On the other side of a mass of naturally occurring cattails that define the streambed, he planted two silvery-leaved willows (Salix alba var. sericea) and a Shawnee Brave bald cypress (Taxodium distichum). Brine says the upright trees are designed to tie in the planting with the distant trees growing on a ridge in the background.©2011 Rob Cardillo

As a landscape designer, however, I enjoy engaging and involving my clients with their gardens. Based on my own experience, many are intrigued by and value the interaction of wildlife and plants in their gardens, so they embrace the concept of naturalistic design not only for its positive effects on the environment but because it enhances their own enjoyment.

A naturalistic garden spotlights the unexpected while appreciating the routine; it includes the discovery of a never-before-seen insect, a migrating bird’s return to its customary nesting spot, and the anticipated sighting of hummingbirds at the opening of the first native honeysuckle flower. Becoming attuned to recurring natural events deepens our understanding of the intricate workings of ecosystems and gives our gardens meaning that transcends the superficial.

Living with nature and observing its rituals is its own reward—perhaps even more so now when many of us are looking for ways to escape the relentless demands of the technologically driven world we now live in. When you’re in a naturalistic garden, you’re part of nature and its interconnected yet seemingly spontaneous activities. You’re alert and sensitized; if the tall grass moves in the distance, you wonder, what animal is moving unseen? When the usual bird song becomes louder and more urgent, you look to see if a bird of prey or a snake is threatening a nest.

Enabling and discovering these interdependencies is at the heart of a naturalistic garden design.

A naturalistic garden has a dual focus; like horticulture itself, it’s balanced between art and science. As an artist, you work with feelings and beauty, while as a scientist, you’re concerned with conservation of your garden’s environment and its wildlife. When you create a naturalistic garden, you have to mediate between these sometimes conflicting perspectives. 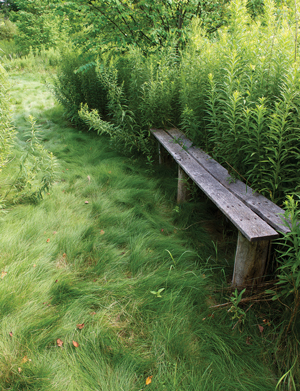 Every garden needs places for rest and contemplation. This bench, made from oak planks used by local horse farms and locust wood harvested on the property, sits along a path of “no-mow” grass (a blend of fescues that Brine does mow occasionally, mainly to suppress weed growth). Here, visitors can look back through the trees toward the house and office, or simply enjoy the wildlife drawn to the natives growing in a natural meadow. ©2011 Rob Cardillo

From my experience, in some cases it is possible to find a happy medium between traditional garden design and naturalistic garden design. Say, for instance, you are strongly attracted to some particular quality of Japanese, French, or English garden design. My advice would be to draw inspiration from that design and incorporate it into an indigenous style.

Although designing a garden to match the fundamental conditions of your site— sun or shade, moist or dry ground, and acidic or alkaline soil—is important in all gardens, it’s particularly critical for naturalistic gardens. Within the overall design, always place plants where they will thrive, not where you’d prefer they grow for aesthetic reasons. This may sound fundamental, but how often have you fooled yourself about a plant’s preferences because you wanted it in a prominent location or next to another plant? I will be the first to admit that I’ve done this many times. The first rule of designing a naturalistic garden, however, is to use realistic, not just wishful, thinking.

Confining yourself to plants that are well suited to existing conditions may seem limiting to gardeners who are used to radically amending soil or removing trees to create sunny borders. But with a naturalistic garden, these limitations actually help you find, or preserve, your landscape’s identity by excluding the inappropriate.

There is a generally unacknowledged sleight of hand, a purposeful confusion, involved with designing a naturalistic garden. Much like magicians, naturalistic landscape designers create illusion and don’t always want to share the smoke and mirrors.

Those of us who specialize in naturalistic gardens may not readily admit it, but we tend to choose and place everything in a naturalistic garden just as carefully as designers do in a traditional garden. In my designs, I try to blend the existing and introduced plants so they co-mingle and the distinctions are blurred.

GIVING BACK TO NATURE

Too often, even gardeners take nature for granted. A naturalistic garden offers us all a unique personal opportunity to nurture nature. I like to view naturalistic gardens as part of a two-way remediation; they are a means for each of us to give back to nature while, at the same time, we are benefiting from nature. For those who choose to create a naturalistic garden, the dividends are richly rewarding.

Duncan Brine and his wife, Julia, are principals of GardenLarge (www.gardenlarge.com), a landscape design firm. The couple’s six-acre garden in Pawling, New York, is a regular stop on garden tours.

This article is reproduced, with permission, from the September/October 2010 issue of The American Gardener magazine, published by the American Horticultural Society (www.ahs.org).