in the Hudson valley.

The Brine Garden, in Pawling, New York is a private, naturalistic garden on the scale of a public garden. Underway since 1990, this six-acre garden is the work of GardenLarge principal landscape designers, Duncan and Julia Brine, with the assistance of their staff.

“By sheer proportions of the plant material, the elements of concealment and surprise are written into the landscape of this naturalistic garden.”

“We were moving through what seemed like an ocean of plants.”

“With undulating contours that hug the natural landscape of hills and valleys, the Brine Garden works well within its setting, respectfully submitting to the region around it.Yet, through its use of native trees, shrubs and grasses that frame a number of beautiful vistas, it is obvious an artist is at work on this land.” 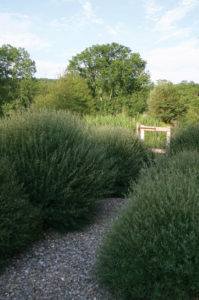 “It is six acres of magnificent planting, tucked away in rolling hills…”

A naturalistic garden is a Purposeful Confusion

“Trees, shrubs and grasses dominate and offer their share of color and texture…
Many of them are vigorous varieties like Joe Pye weed, ligularia, ironweed, nepeta and golden aster — all in naturalistic sweeps,
or alongside a pathway, or in large clumps here and there, rather than in traditional flower beds. Hellebores and ginger grow in profusion beneath the trees in woodsy areas. There are many native plants, though Brine welcomes robust foreigners, too …. But even the immigrants are those that look as if they belong in a North American garden.”

GardenLarge’s Brine Garden “slopes steeply from its crest down to marshy lowland with a small stream running through it, offering a variety of terrain to be experimented with.” 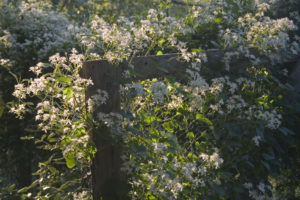 “Now, gravel paths and wooden walkways snake through the property and down the hillside, through plantings blending from natural to controlled and back again, so that it’s often impossible to tell which was Duncan’s work and which was the hand of Mother Nature.”

‘I work hard for that,’ he says, recounting how one visitor on a garden tour asked him if he’d planted the phragmites marsh grasses at the foot of the hill. ‘It’s a multi-acre area,’ Brine says in wonder, and although the phragmites are invasive, it’s clear he was pleased the visitor couldn’t tell which of the grand gestures on his property he is responsible for.

‘It’s a very purposeful confusion,’ he says.
Each area of the maze-like garden beckons and offers its own rewards.
Follow the wooden walkway over the little bridge to the marsh area, and you find yourself in a tunnel of grasses towering over your head, with Miscanthus cuttings forming a carpet on the ground. The jungle effect is so strong you could almost believe you’re in Cambodia. Then emerge, and you’re back at the foot of an American hillside planted with birches and mulberry trees…”