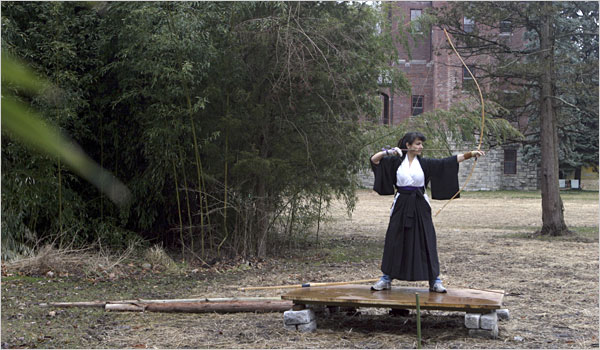 Alison Broda practicing Zen archery at the Garrison Institute on Friday. It is a discipline combining intention and action, focus and carry-through.

The idea of the Zen archery is to combine intention and action, focus and carry-through. Physical action slows. The archer and the bow become one. The art becomes artless. The archer evolves through perseverance and discipline. Or so they say.

It’s not much of a stretch to go from the visiting Zen archers to the institute’s own initiative, an ambitious program next month to look at how the ideas of Mohandas K. Gandhi relate to current environmental issues, particularly climate change.

So there’s nothing unexpected in the current melding of Gandhi and climate change, tied to the Metropolitan Opera’s first staging of Philip Glass’s opera about Gandhi, “Satyagraha” (“The Power of Truth”), beginning April 11. After that is a private conference at the institute, followed by a free public event on April 13 at the Cathedral Church of St. John the Divine in Manhattan including scholars, environmental leaders and artists, among them Mr. Glass.

Remarkably, almost a century ago, Gandhi’s writings were full of thoughts on the environment.

“The earth provides enough to satisfy every man’s needs, but not every man’s greed.”
“God forbid that India should ever take to industrialism after the manner of the West. … If [our nation] took to similar economic exploitation, it would strip the world bare like locusts.”

From Storm King to Woodstock to the institutes and ashrams that dot the landscape today, the Hudson Valley has played a remarkable and barely understood role in the evolution of the nation’s environmental and personal consciousness over the past half-century.

Proceeds to Benefit Sam’s Point Preserve and The Nature Conservancy

As the painting takes shape the audience will be invited to bid on individual canvases, while enjoying refreshments from acclaimed area restaurants and wineries.

“Art fueled the land conservation movement historically in the Hudson Valley, and today artists continue to engage people in the beauty of our region,” said Cara Lee, director of the Shawangunk Ridge Program for The Nature Conservancy’s Eastern New York Chapter.

FrOGS has been able to acquire an 18-acre patch of uplands and floodplain meadow bordering Quaker Brook at the corner of Haviland Hollow Road and East Branch Road in the Town of Patterson.

Quaker Brook, sometimes called Haviland Hollow Brook, runs through the 18-acre parcel before turning south to join the East Branch of the Croton River in the Great Swamp.

Quaker Brook is not only a major artery that feeds the “heart” of the Great Swamp but it’s also an ecologically unique and important waterway. Fishermen know this brook as a pristine trout stream thought to be one of the rare places where native trout populations can still survive.