For Duncan Brine, big is beautiful. Or, rather, his goal is to turn big into beautiful. Actually, his plus sizes run purely in the property realm. He likes the challenge and freedom that large footprints offer for gardening.

Mr. Brine’s own landscape in Pawling, N.Y., is large, but not obese. The garden is composed of six acres on two sides of the road. By local standards, and compared to some of the vast estates in the neighborhood, it isn’t mammoth. And yet, he makes use of pretty much every corner, which helps to expand the experience. 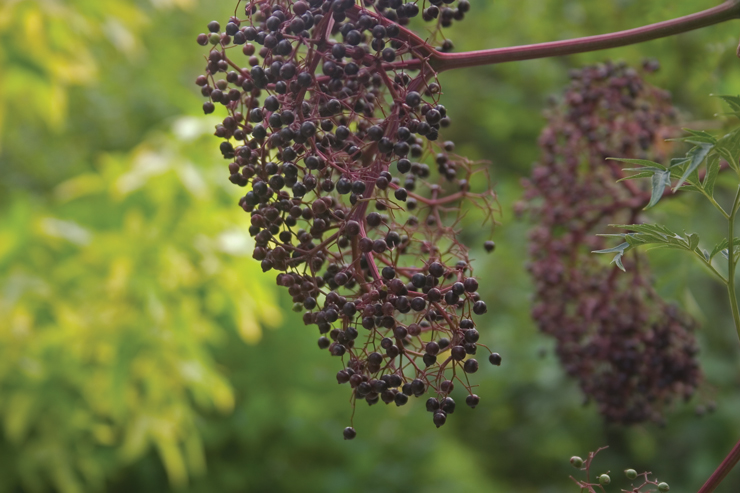 However, the surrounding acreage isn’t a garden in the conventional sense of the word. It’s more like a movie set. No, no-don’t think of clipped English allées and fountained rose gardens, because that’s definitely not what it’s all about. Rather, think theatrical. And then, go American style. In a way, a Western wouldn’t be too far from the mark. The closest I can come is to call the Brine garden a New England spin on a chaparral, but everything is larger and denser.

If your mind jumps immediately to Hollywood when you arrive at Duncan Brine’s, it’s not surprising. Originally, he planned to be a director. Early in his career, he spent three years in Los Angeles doing film production work for venues including the Faerie Tale Theatre. However, it didn’t take long for him to tire of the L.A. scene, which is how he ended up in New York City….

Duncan Brine: Be mindful of context

When Duncan Brine talks about gardening, he uses terms you might expect to hear during a university lecture on literature or art. Whether it is “regionalism” or “transparency,” he uses the words endearingly and enthusiastically. Brine, who owns GardenLarge, and tends a six-acre garden of monumental proportions in Pawling, N.Y., can’t help it. 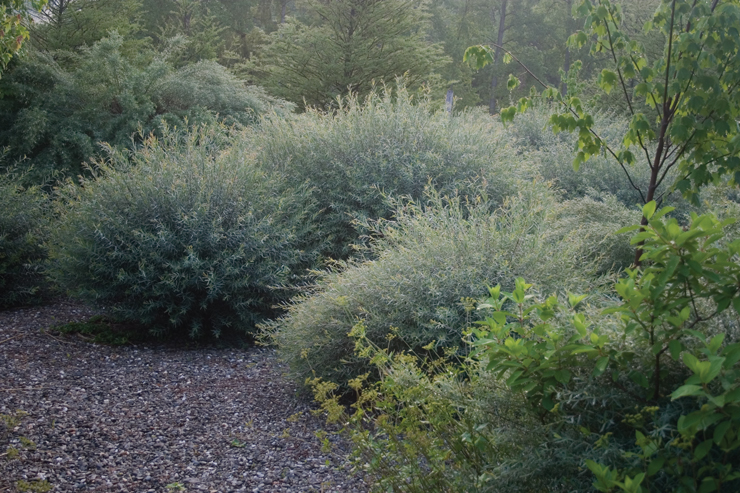 To him, gardening is art on a large scale, and it has global implications.A garden can affect the environment ecologically, while it elicits an emotional response from the visitor. With undulating contours that hug the natural landscape of hills and valleys, the Brine Garden works well within its setting, respectfully submitting to the region around it. Yet, through its use of native trees, shrubs and grasses that frame a number of beautiful vistas, it is obvious an artist is at work on this land.

Both Brine and his wife, Julia, have art in their blood. She is a botanical illustrator and graphic designer, and he once was an art director in film. He also wrote the introduction to “The Literary Garden: Bringing Fiction’s Best Gardens to Life” (Berkley Publishing Group, 2001). The transition to rural gardening would seem an unlikely step for the couple, who lived in Carroll Gardens, Brooklyn, a place where Brine felt he had to sift the soil, literally, to see its composition.

But there was drama in the dirt: In that first garden, he discovered teeth, bullets and his own gardening instinct.

It became clear that he had an eye for gardening as more and more friends asked him for help with theirs. Soon he was hooked, turning his business pursuits to the soil rather than the stage, beginning with small city spaces on rooftops and tiny yards. His clientele expanded, and as it did, Brine felt the need to take on larger projects, leaving the city behind in favor of open green spaces. In 1990, the couple moved to a farmhouse in Pawling, N.Y., and soon after bought the adjoining property. 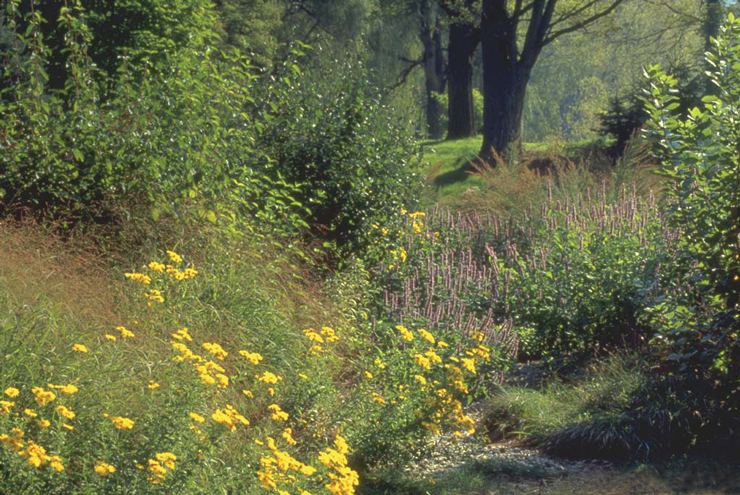 Duncan Brine’s 6-acre Pawling, N.Y., garden has 20 sections, including this one named the Hidden Corner. The yellow aster, Chrysopsis mariana ‘Golden Sunshine’, is seen with a haze of the native grass Panicum virgatum, while deep blue-purple stems of Agastache rise in the background. © Michael Dodge

The two farmhouses sit on an embankment overlooking a marsh and glade, and are surrounded by gravel pathways that connect different garden areas that showcase perennials and horticultural rarities…

Brine’s expertise in landscape design and large garden project management is evident in the garden, which reflects his theatrical background as well as his interest in regionalism. “It’s an amazing place, so varied and so enormous,” said Sydney Eddison, whose own garden in Newtown is legendary. “The vastness of his vision is just striking,” said Eddison, herself the author of many gardening books.

“I was struck by his super grasses – he has a hedge of huge grass – miscanthus giganteus, and groups of clethra (shrubs), and I also enjoy his trees: weeping katsura, Japanese cedar and bald cypress. “To experience and see his collections is just wonderful.” 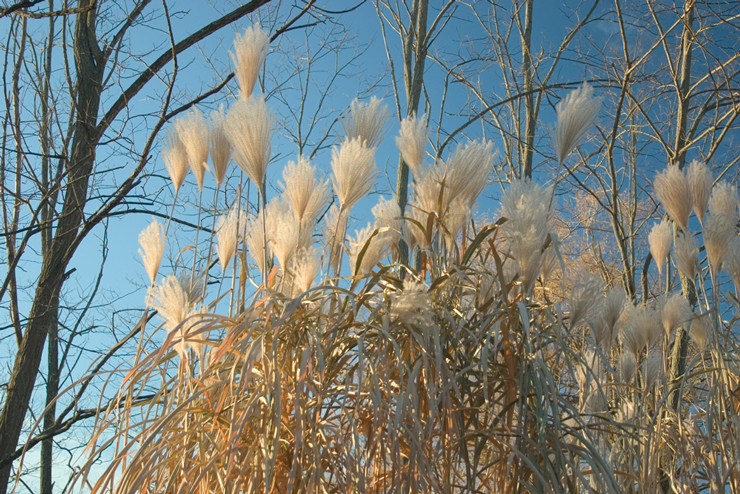 Rich with maples and groves of native plants, the Brine Garden asks the visitor to recognize that a property is part of a larger context, that it is representative of the region. “There should be no disconnect between the property and the region,” said Brine, who teaches at the New York Botanical Garden.

“When designing a garden, you should be mindful of its context as part of the area around it.” But there is a problem. “We are losing our regional sense of identity,” said the designer, who touts the benefits of planting native species. In the Brine Garden, the visitor can get a feel for Brine’s sensibility.

He plants native, if unusual, plants and has a flair for placing them in ways that surprise the visitor. A tropical surprise can confront the visitor at the least expected turn. “If a garden feels right,” he said, “there is a reason for it.”

Be aware of contour, pattern, placement and contrast, he suggests. When designing a garden for a client – he works with fewer than 10 a year – he will, for example, restore natural lines to the landscape if they have been bulldozed. “I try to restore the landscape to its pre-disturbed state, making an effort to heal that scar.” When he plants trees, he staggers them rather than planting them in a line. 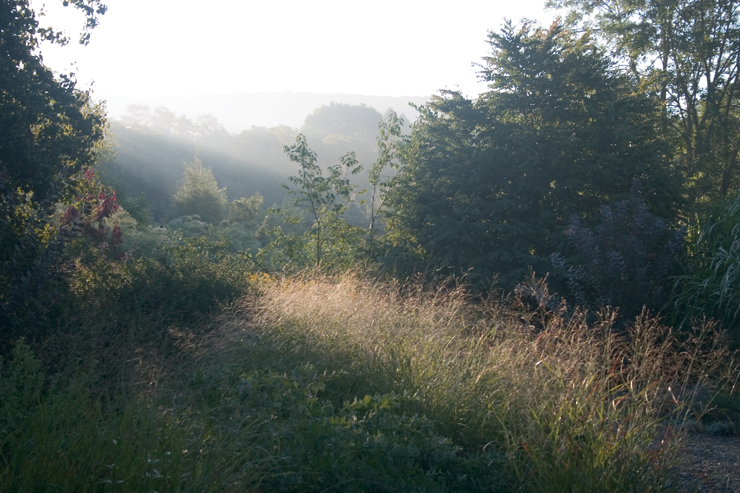 “I am in love with curves,” he said, “and planting trees is the greatest thing you can do. A young tree is more interesting than anything else you can plant. Trees provide shade and places for birds to land, and habitat is tied to regionalism.” Trees and shrubs should be the first step in creating a garden.

“And give them room to grow,” Brine said. Be conscious of the house, too. “The house is the soul of the property,” and should relate accordingly to the gardens and views.

When planting, mix up the foreground and background in a planting, he suggests, breaking a fairly traditional gardening rule. Traditionally, tall plants are in back. He suggests planting something large and transparent in front, like grasses.

The high stalks can create a veiled, gauzy effect to what lies beyond. Transparency. “What’s tucked away behind is the surprise,” he said, emphasizing again the importance of that element. Every plant doesn’t have to be a rarity, he said, but locating that special plant is part of the joy of gardening. “Gardening is an interactive experience: It demands that you look,” he said.

Of course, contrast is a basic rule of design. “Use light and dark, small leaves and large.” The use of native plants is very important. Non-native plants, Brine explained, can behave in a “thuggish” way and maul both the look of the landscape and the chemistry of the soil. These invasives can kill the native plants over time. Kathleen Nelson, who owns Kathleen Nelson Perennials in Gaylordsville, agreed.

The native ecosystem evolved with a balance of animals and plants that support each other. “No organism is bad,” she said. “But non-native plants are not subject to the same controls as natives. They have been removed from the controls they evolved with.”

Invasive vines such as mile-a-minute can overtake a landscape in very little time, killing native plants that are in their way. This is a serious concern, said Brine. “It is a major problem, and not just in our backyard.”

GardenLarge’s Brine Garden is located at 21 Bluebird Inn Road in Pawling, NY. It will be open July 21, 2007 from 2 to 6 p.m. as part of the Garden Conservancy Open Days program.

The program appeals to gardeners of all levels and tastes and demonstrates the multiple approaches to Northeast gardening. The “Open Days Directory” lists the gardens with a brief description, dates, hours and travel directions. A small admission fee to each garden benefits the

Conservancy’s preservation programs. The directory is available in bookstores, or you can get information on some of the gardens at www.opendaysprogram.org.