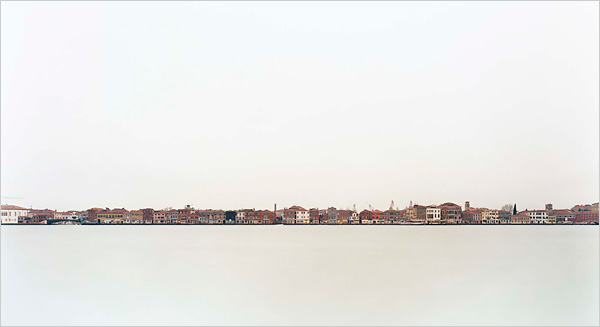 THE soft-colored photographs of Sze Tsung Leong capture contrasting landscapes: the verdant green of Germany; the mirage of shimmering towers in Dubai; the urban geometry of Amman, Jordan; the red tiles roofs of Italy. But always the eye is drawn to the distinct line where sky meets earth.

In Mr. Leong’s panoramic photographs of major cities and rural landscapes around the world, the horizon line consistently falls in the same place. So when his images are hung side by side — as 62 of them are now at the Yossi Milo Gallery in Chelsea — they create an extended landscape of ancient cities and modern metropolises, desert vistas and lush terrain.

“In terms of looking, the horizon is the farthest we can see,” he explained, yet in terms of knowledge, it reflects “the limit of experience.”

For the last seven years Mr. Leong, a 38-year-old Chinese-American with a British accent and a Mexican birth certificate, has expanded his experience by traveling to unfamiliar cities, where his first priority is to find a sweeping view from an elevated position.
“When I’m really familiar with a place, it is more difficult to visualize it,” he said, citing New York, his home, as an example. “But being confronted with a new situation, I find that I’m more aware of things visually.”

A green roof replaces traditional roofing with a lightweight, living system of soil, compost, and plants.

The plants–and the dirt and gravel that hold them–filter rainwater and some of its pollutants. The plants produce oxygen that help clean the air. A green roof reduces a building’s heating and cooling costs, acting as a form of insulation. And they lessen the heat island effect, in which buildings warm up so much that they heat the surroundings.

Explore the Benefits of a Green Roof