Millions of acres could face commercial development because funds have not been allocated to purchase them, reports say.
By Tami Abdollah, Los Angeles Times Staff Writer
April 9, 2008
Millions of privately owned acres in National Park Service boundaries could be developed into luxury homes or commercial enterprises because the federal government has not allocated funds to buy out these lands, according to two reports issued this week.
About 4.3 million acres of privately owned land lie within the 391 National Park Service properties nationwide, according to a National Parks Conservation Assn. report released Tuesday.
The national parks were set up by Congress to acquire and protect lands within their boundaries for resources preservation and public use. But federal appropriations to the Land and Water Conservation Fund, the primary source of the National Park Service’s acquisition money, has dropped by more than $100 million in the last nine years, according to the report.
In 1999, Congress appropriated nearly $148 million to the National Park Service for land acquisition. Nine years later, that figure was $44 million.
tami.abdollah@latimes.com 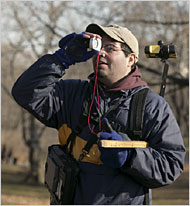 Mr. George used a clinometer to measure the height of a tree. He also used a G.P.S. device to locate trees.

Mr. George was collecting information for a comprehensive inventory of Central Park’s trees, the first of its kind to use global positioning technology to pinpoint the exact location of each one.

The Central Park Conservancy, a nonprofit group that manages the park under contract with the city, hired the Davey Resource Group, based in Ohio, to conduct the survey with a team of certified arborists, including Mr. George. The final count: 24,132 mature trees (informally defined as higher than chest level with a trunk diameter of more than six inches). The arborists noted an additional 2,000 saplings, one to six inches in diameter.

The survey was completed in March, producing, for each of the park’s trees, a computer file storing its long-term history. With this record, park workers can assess the maintenance needs of each tree, track continuing threats like Dutch elm disease and find new planting opportunities.

The most breathtaking tree in the park, in Mr. Calvanese’s opinion, is an American elm in the East Meadow, which has grown to 59 inches in trunk diameter from 44 inches in 1982.

He called the stand of elms along Literary Walk, at the southern end of the park’s central promenade, the greatest in the country, and noted a wealth of “specimen trees,” which assume perfect form and stand out from the surrounding landscape.

The survey concluded that the park’s efforts to reduce invasive trees, which produce lots of seed and take over shrub borders, had been successful: the number of Norway maples was 860, down from 1,302 in 1982. The Norway maples and Sycamore maples, European imports, are being replaced with native species like the red oak, black oak and sugar maple.

More than 300,000 gallons (more than a million liters) of water per second were released from Lake Powell above the dam near the Arizona–Utah border.

“This gives you a glimpse of what nature has been doing for millions of years, cutting through and creating this magnificent canyon,” Kempthorne said after he pulled the lever Wednesday, releasing the water from Glen Canyon Dam, upstream from Grand Canyon National Park.

The water level in the Grand Canyon rose 15 feet (4.6 meters) in some places.

Officials hope water from the three-day, controlled flood will leave behind sediment and restore sandbars as it goes back to normal levels.

Before the dam was built in 1963, the river was warm and muddy, and natural flooding built up sandbars that are essential to native plant and fish species. The river is now cool and clear, its sediment blocked by the dam.

The change helped speed the extinction of four fish species and push two others, including the endangered humpback chub, near the edge.

Shrinking beaches have led to the loss of half the camping sites in the canyon in the past decade. 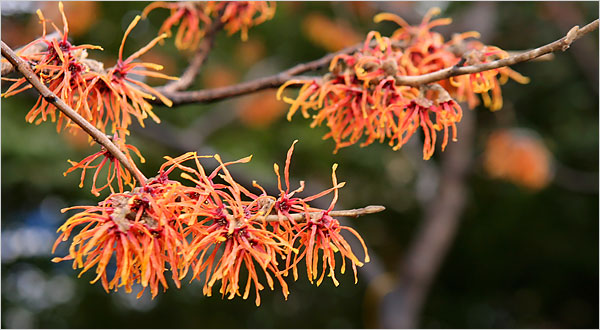 I first encountered Hamamelis mollis, the Chinese species, years ago, at Clark Botanic Garden, in Albertson, N.Y. It was a sunny January day, and this sprawling beauty — 5 feet tall and 20 feet across — lounged like a big blonde sunning in the 12-acre garden.

Unfurling with the sun, the little clusters of clear yellow crimped flowers were sending their sweet scent my way in an impossible promise of spring.

How could these plants be blooming in the middle of winter? And why would they want to?

“It has to do with chilling requirements,” said Peter Del Tredici, a lecturer at Harvard and former director of living collections at the Arnold Arboretum of Harvard University in Boston. The very first witch hazel to bloom, for example, is Hamamelis vernalis, native to the Ozarks, and hardy to 30 below zero. It bloomed in Boston in mid-January.

“Vernalis only requires a month’s worth of chilling,” Mr. Del Tredici said. “That’s long enough for this species. The days are getting longer. And it takes advantage of insects that hatch with the first warm weather.”

The witch hazels that enchant this time of year are H. mollis, the Chinese species; its many cultivars; and hybrids of the Chinese and the Japanese species (H. japonica), which range in color from pale yellow to gold, orange and red.